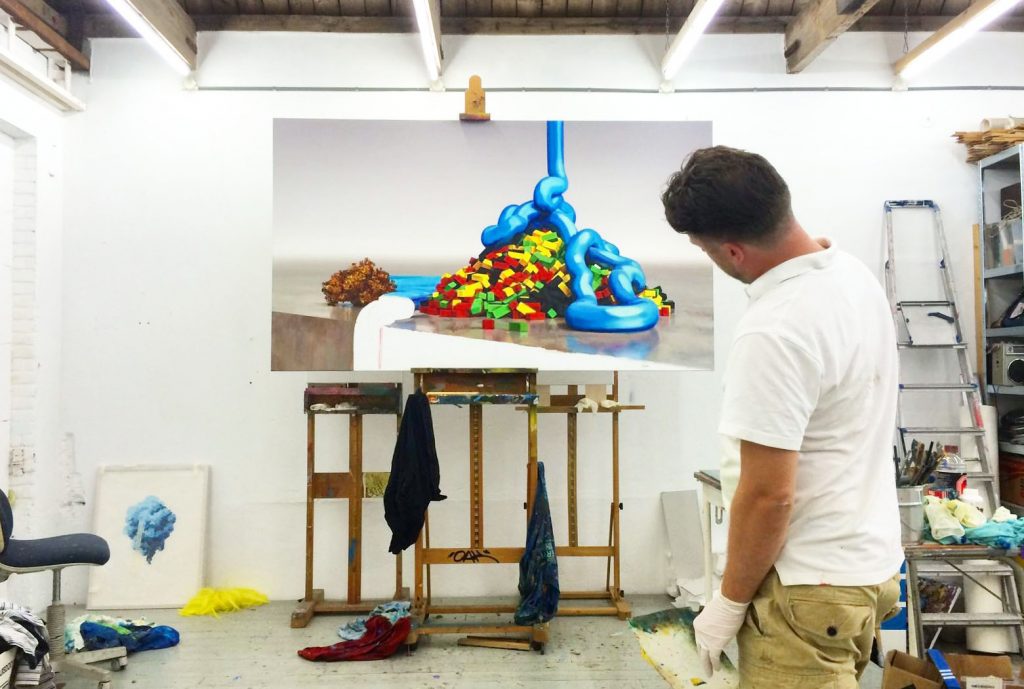 Michiel van der Zanden (1979, The Netherlands) is fascinated by the visual language of videogames and 3D graphics. He looks at digital imagery through the eyes of a painter. In the combination of artificiality and realism, he sees a lot of similarities in the way artists have been creating illusions for centuries. And he isn’t just fascinated by games and graphics; it’s also the much broader human need to recreate all possible daily life phenomena. This can be found in children’s toys and amusement parks, model making and advertising.
In this marriage of realistic painting and computer generated imagery, Michiel van der Zanden’s work is characterized by a constant interaction between the real and virtual world, between classical painting and the new age of digital imaging. This results in paintings that look like they’ve walked out of a computer program, as well as overly synthetic sculptures and software-based videos. Michiel van der Zanden works and lives in Breda

“Michiel van der Zanden’s paintings and sculptures are a bizarre marriage of realistic painting and computer generated imagery. Van der Zanden frequently uses a computer modeling program to compose the sketches for his paintings, taking real objects and settings and isolating them in an uncanny digital space, where the laws of physics and architecture seem somehow less rigid than in reality.
…Van der Zanden doesn’t just use a modeling program to compose scenes – he exploits the otherworldly capabilities of such a program to isolate objects in blank space, and then holds true to the models he creates when he produces his acrylic and oil paintings. The result is paintings that have a look that can only be seen in a computer program, and Van Der Zanden’s skill at rendering smooth objects and softly blurred yet seemingly endless backgrounds make the juxtaposition all the more jarring.”

“The amazing visual constructions by Michiel van der Zanden contain both ironic lightness, as sincere wonderment and are rooted in popular culture, games and images from his childhood.
Van der Zanden takes his conscious observations of oddities and props in his daily environment into the digital world. Using 3D software, he can examine these observations, magnify and manipulate them.
This 3D imagery serves as sketch material for his paintings. The clear digital traces, combined with a sophisticated painting technique, conduct a magnification and alienation of reality for the second time.”